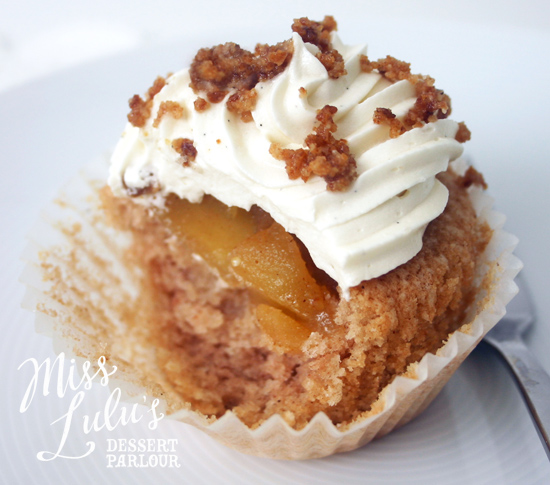 When I was a young girl - my patient dad tried in vain to teach me fractions and he would try to get my attention by saying "Let's start with a pie..." and my response would always be... "What flavour!?"... I was always wishing he would say apple!  Needless to say I'm sure he realised pretty quickly that I was never going to be a mathematician!

In our apple crumble cupcake (soon to take cake form as well) - we've tried to include all that is divinely delicious about an apple pie in cake form :)
We started with a cinnamon sponge and stuffed it with apple pie filling that's been spiced with cinnamon and sweetened with agave nectar.  Then to finish it off, we've soft-served the top with our vanilla bean dairy free cream and sprinkled it with a crunchy cinnamon crumble.
YUM!
Posted by Miss Lulu at 3:34 pm